SOLD – Congratulations to her new owners! 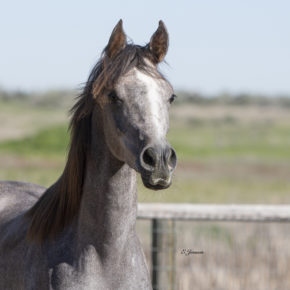 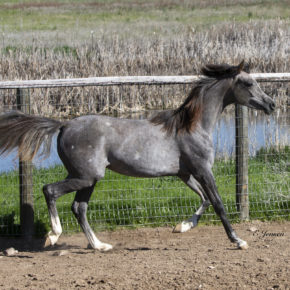 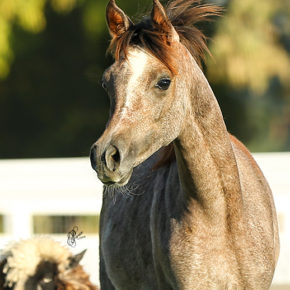 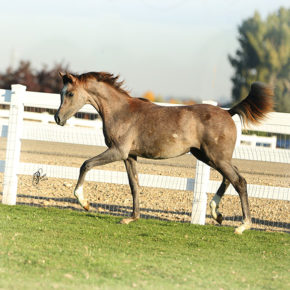 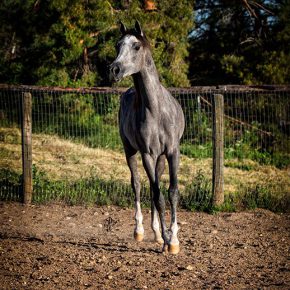 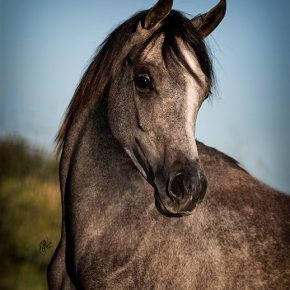 TIGERLILLY MRF is a tall 2018 grey filly who, as of April 2019, has yet to enter the show ring. Sired by the international and American Egyptian Event champion straight Egyptian stallion, BAHA AA (Al Ayad x Baaraqa AA by Laheeb) and out of theregionally and nationally titled mare, MORNING STAR DP (SF Veraz x SH Tinkerbell by Ferrer), TIGERILLY MRF appears to have inherited the significant Arabian head type of her Egyptian sire, as well the size and floating motion of her dam.

TIGERLILLY MRF’s sire, BAHA AA was bred by Ariela Arabians, imported into the U.S. by Raymond Mazzai and Inga Applequist, and is now owned by The Baha Partners, LLC.. A typey grey straight Egyptian stallion sired by Al Ayad (also the sire of the well-known international champion stallion, Al Ayal) and out of Ariela Arabians’ highly esteemed *The Vision HG dam line, BAHA AA arrived in the United States with multiple national and international titles to his credit. His first major title was that of 2011 Israeli National Junior Champion Colt, and BAHA AA has the distinction of having been named Supreme Champion Stallion at the Egyptian Events in both Europe and the United States.

BAHA’s sire, the German-bred stallion Al Ayad, represented an almost total outcross for the Ariela breeding program. Though relatively unknown to American breeders, Al Ayad did enjoy success in limited showing in Europe, his two most notable victories being Senior Champion at the 2006 Israeli Egyptian Event and Champion Stallion at the 2008 Asil Cup International in Germany. Most Arabian horse enthusiasts are very familiar with BAHA AA’s dam line. He is one in a series of very good stallions to come out of the highly lauded *The Vision HG dam line at Ariela Arabians in Israel.

That is not to say he has not sired ribbon winners, but so far, few of his straight Egyptian foals have brought home the big prizes. One straight Egyptian BAHA AA daughter who has worn roses, LF BintRakizah (x LF Rakizah by *Al Adeed Al Shaqab), bred and owned by Lyday Farm, appears to so far be his most successful, earning 2017 Arabian National Breeder Finals Champion Mare and 2018 Egyptian Event Straight Egyptian Most Classic Head Female titles.

BAHA AA has been bred to some of our industry’s finest, including the national champion mares BHF Dark Angel (twice), RH Triana,and MD Hibat Allah (twice). His oldest foals are still young, so chances are good that we will see more successful BAHA AA foals enter show rings around the world.

Thus far, MORNING STAR DP has produced four foals, only one of which has been shown. Her 2015 son, the gelding Sutar WCF (by Versace) is a class a champion and Canadian Top Ten Futurity Gelding.

By virtue of her famously necky ancestors Echo Magnifficoo, *Aladdinn, and Kajora, one would expect TIGERLILLY MRF to have a long, elegant neck – and she does. The influence of those same horses, *Aladdinn appears three times in her pedigree, twice through Echo Magnifficoo, might suggest TIGERLILLY MRF would lack the modern head type so treasured today, but here, the influence of her straight Egyptian sire (and perhaps the influence of her Anaza El Farid in her dam’s pedigree) shines through. TIGERLILLY has a beautiful short, dishy head with very wide forehead and lovely large dark eyes. Her size and her lofty trot with exceptional suspension are reminiscent of her maternal great-great grandsire, National Champion Enzo.
All in all, TIGERLILLY MRF is a lovely filly with the type, structure, motion, and animation to make her competitive in both the halter and performance arenas, should she make it in the ring, and a pedigree to make her a serious, foundation quality broodmare later in life.