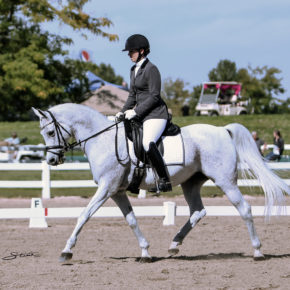 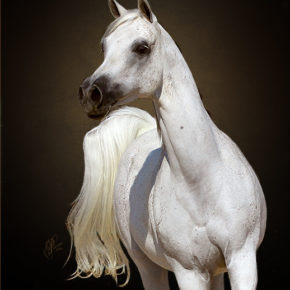 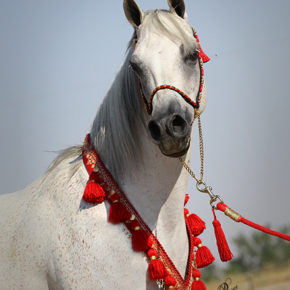 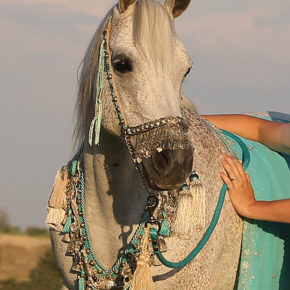 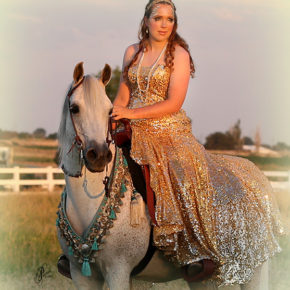 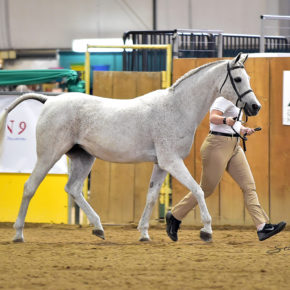 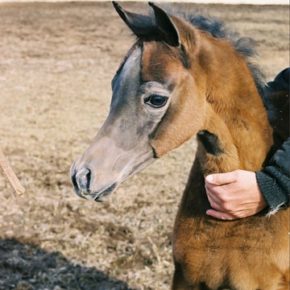 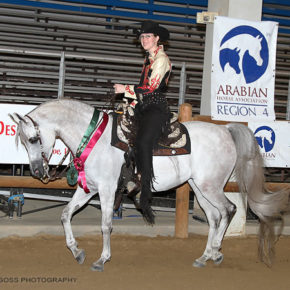 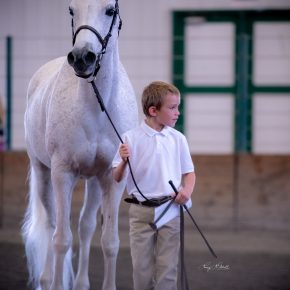 A tall, solidly built grey mare with a winning disposition, Paloma SF+ is by Georgio AF and out of the *SR Nadom granddaughter, WA Lida Rose. A look at Paloma’s pedigree sheds light on why she, herself, has been a successful performance horse and why she is already a promising producer of successful halter and performance horses. Her sire, Georgio AF (Versace x Fortunes Ciara by Wind Fortune), was shown only briefly as a youngster, earning a regional top 5 and two national top tens, before turning his attention to the breeding shed. And, as might be expected, the breeding shed is where Georgio really shined. By one of the most popular and successful sires of our time, Versace (by Fame VF+) and out of what can only be described as a stellar dam line, Georgio has sired multiple national winners in both halter and performance including the handsome 7-time regional champion, 5-time national top ten, and U.S. National Champion Hunter Pleasure, Halston SF+/; regional champion and Canadian Reserve Champion, Valentino SF; 2-time regional HA/AA champion and Youth National Champion HA/AA Hunter Pleasure JTR Elite, Manero SF+/; 5-time regional champion HA/AA, 8-time national top ten, and Canadian National Reserve Champion HA/AA Futurity Filly, Fashionista SF+; 4-time regional champion HP, U.S. National Reserve Champion HP Futurity, Alejandro SF+; and 2-time regional champion with Canadian National Top Tens in Western Pleasure Select and Ladies Side Saddle Western, as well as Canadian National Reserve Champion Ladies Side Saddle Western ATR, Tamar Lucchese, to name a few of Paloma SF’s winning paternal siblings.

Georgio AF’s sire, Versace (Fame VF+ x Precious As Gold by El Shaklan), was a successful show horse, but an even more successful sire – and much of that siring done after his untimely death at just shy of 13 years old. Even more impressive, Versace has sired both national and world champion halter winners as well as national champion performance winners – and his son KM Bugatti, earned both national halter and performance championships in the same year.

From Versace, Georgio inherited his lovely facial structure – the low set eyes set in prominent sockets, the dry, sculpted face – a look quite unique to Versace and his descendants – and a good dose of Versace’s athletic ability, which Georgio consistently passes on to his own get and grandget, including Paloma SF+.

Paloma SF’s dam, WA Lida Rose appears to have never been shown; however her sire, W A Salute (*SR Nadom x El Azraffa by Azraff) was a fairly successful show horse, winning 11 of the 16 classes he entered (in halter and performance) and earning a Canadian Top Ten title. W A Salute’s sire, *SR Nadom, bred by Tersk Stud in Russia, was a noted champion performance siring son of the legendary Russian stallion, *Muscat. Salute’s dam was the result of quite old, but extremely valued Raffles/Crabbet/Desert breeding – combining the esteemed programs of Roger Selby, J.M. Dickinson, W.R. Brown, Albert Harris, and Crabbet Stud to name a few. W A Salute sired 64 foals, with several halter and performance winners among them, including at least a couple of fairly successful race horses. WA Lida Rose herself produced two other show winners, but neither approached the success that her daughter Paloma SF has achieved. A full sister to Paloma SF+, DSD Irishmist, did produce a 4-time U.S. National Top Ten (twice as a colt, twice as a gelding) DA Valentino son, PL Sinatra – a double Versace, double Fame VF+, and triple Bey Shah+ bred grey gelding.

It’s an impressive show record, but perhaps even more significant is that Paloma SF truly is a family horse for the Jensens of Moss Rose Arabians, LLC. In 2018, the Jensen’s then 6-year old son, Will, began showing Paloma, and together, the youngster and the big white mare earned second place honors in Arabian Sport Horse Mares In-Hand JTH 18 & Under at the Region 3 Pre-Show. Will later showed Paloma in hand at 2018 Sport Horse Nationals – to the crowd’s delight. They didn’t place there, but their future appears very bright.

Though very successful there, Paloma SF+ hasn’t spent all her time in the show ring. She has so far produced three foals for Moss Rose Farm – a colt and two fillies. So far, 100% of Paloma’s foals shown have earned national top tens or better.

Paloma’s first foal, the 2011 bay gelding Phive Star Poker+ (by LBA Lode Star), is a 7-time national top ten, 3-time regional champion, with multiple wins in Scottsdale and Class A competition in multiple disciplines including western trail, English trail, horsemanship, showmanship, and western pleasure. Like his dam, “Harry” as he is called, has the disposition for which Arabian horses are treasured. A great many of his wins have been with a youth or amateur rider. In 2016 at age 5, Harry made the cut at Canadian Nationals to earn his first national top ten – this one in Western Trail – with amateur owner Erin Brown. In 2017, Harry carried another family member, 13 year old Camryn Pugh, to 2017 U.S. Youth National Reserve Champion A/HA/AA Horsemanship 13 & Under honors.

As of the fall of 2018, Paloma’s dark bay 2016 filly, Pacific Rose MRF by PA Gazsi, has earned three Regional Top 5’s in Amateur and Open Halter divisions. Most recently, “Rosie” earned a 2018 Top 10 in Sport Horse Nationals PB SHIH 2 Yr Old Fillies. Rosie is still owned by Moss Rose Farm, LLC, and current plans are to retain her as her dam’s replacement.

Paloma AF has enjoyed success in many different divisions of the show arena, from halter to dressage, with both a professional trainer and an amateur owner. She pas produced offspring who have been successful show horses all the way up to the national level, and Paloma has carefully and dutifully accompanied a six-year-old boy just beginning his own career in the in-hand arena. Only time will tell if there are more shows in her future, more foals, or perhaps grandget who continue her lineage. One thing is certain, Paloma SF is the kind of horse that first attracted people to the Arabian horse – kind, willing, athletic, protective, the kind of Arabian mare the Bedouins would have been proud of. Trite sounding or not, Paloma SF truly is the very epitome of “the versatile breed.” 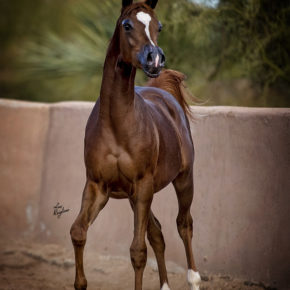 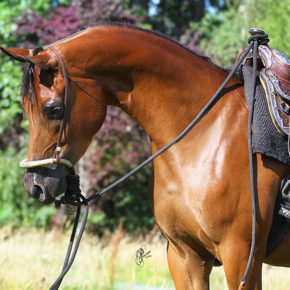 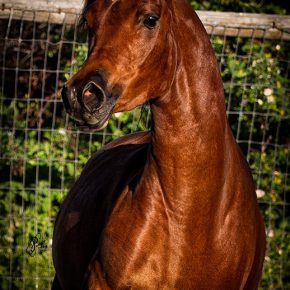 Pacific Rose affectionately known as “Rosie” has met and exceeded all of our expectations from a very carefully planned breeding. She has a very typey and dished head, small muzzle, long and elegant neck, to her amazing hip. All wrapped in a dark bay package. Rosie is going to be fun to show in halter