Melaina A +/ is a stunning grey mare that has been an exciting part of the Moss Rose Farm breeding program. Melaina was acquired as a yearling and has had an extensive show career ranging from competing at halter in Scottsdale to becoming a multi-National top 10 at Sport Horse Nationals.

Inspected and approved by the American Rhinelander Society and Westfalen Verband NA. 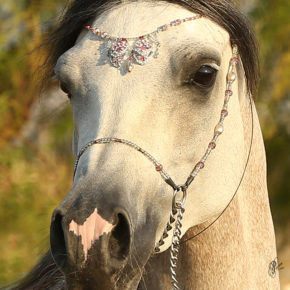 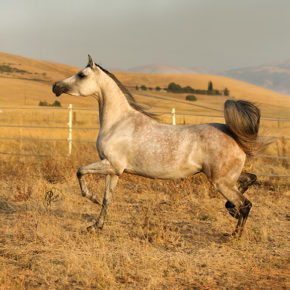 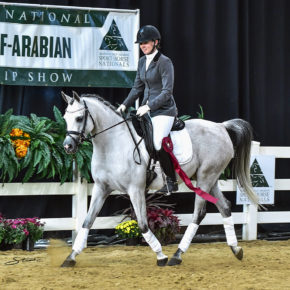 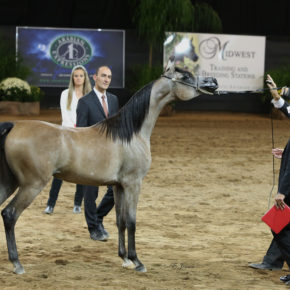 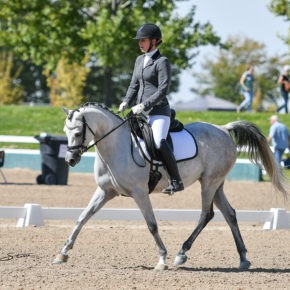 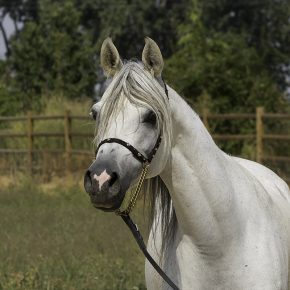 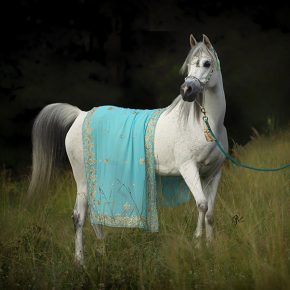 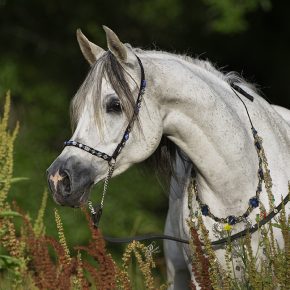 Melaina A+ is the result of a breeding cross that could certainly be expected to produce an exceptional individual, and indeed, it has. By ZT Marwteyn (Marwan Al Shaqab x ZT Ludjteyna by Ludjin El Jamaal) and out of Country Jewel EA (Psymadre x EA Country Lass by My Country Star+), Melaina’s pedigree is one literally packed with champions and champion producers.

Her sire was the subject of one of the breed’s most successful marketing campaigns. Very few North Americans had even seen ZT Marwteyn when his Scottsdale Signature Stallion breeding sold for the sum of $20,000 USD. A masterful Michael Byatt marketing campaign, based largely on a couple of breathtaking foal photos and the high dollar sale of the exotic ZT Marwteyn filly, Alfabia Akiabara, to Shirley and Charlie Watts of Halsdon Stud in England, combined to elicit the sale topping bid. It was a remarkable accomplishment for a young, and at that point, unseen and unshown stallion, although the strength of his World Champion sire line and national champion dam line certainly suggested amazing possibilities. The first two generations of his Ruminaja Ali sire line are the World Champions, Marwan Al Shaqab and his sire Gazal Al Shaqab. ZT Marwteyn’s dam, ZT Ludjteyna, is a daughter of the gorgeous Ali Jamaal son, Ludjin El Jamaal and the national champion mare, Shahteyna (Bey Shah x TW Forteyna). Ludjteyna, herself, was a class A halter champion and 2000 Canadian Top Ten Futurity Filly in very limited showing before her export to Argentina.

ZT Marwteyn began fulfilling the promise of his pedigree when Alfabia Akiabara won her 3 year old class at the 2013 West Coast Cup in Belgium and then finished 4th in her section of 2 and 3 year old fillies at the 2013 Salon Du Cheval for the Watts family. in 2014, Marwteyn was named the leading sire of Sweepstakes winners in the United States. The ZT Marwteyn daughter Del Adora (x GC Seasons of Love by the multi-national champion Marwan son Aria Impresario) was named 2015 Canadian National Champion Yearling filly and 2018 Region 5 Reserve Champion Mare. ZT Marwteyn progeny have done well both in the States and abroad.

A little investigation of Melaina’s maternal family provides plenty of explanation for her own success in the performance show ring – and indeed, her ability to shine in a variety of discliplines. Melaina’s champion-producing dam, Country Jewel EA, by the Padrons Psyche son, Psymadre, and out of EA Country Lass by My Country Star+, was a champion halter mare herself, with many class A, regional, and national titles to her credit. Her most successful foal, after Melaina A+, is the *Dakar El Jamaal daughter, Dakara Mia EA.

Country Jewel’s dam, EA Country Lass, produced three full siblings by Psymadre – the mare Country Gem EA, who had a successful halter career for Rohara Arabians and an even more successful career as a broodmare – 6 of her 7 foals have been multi-champions – the 7th is only a youngster now; while the third full sibling, Psyclone EA+ was even more successful in the show ring than his sisters, as he was a class A and regional champion in halter before earning multiple regional and national titles in western pleasure. A maternal family so consistent in producing such success in both the show ring and the breeding shed lend credence to the importance of the dam line in any horse’s pedigree.

Melaina A+ is a worthy example of her stellar, champion filled pedigree – with a lovely face, floating gaits, and an intelligent, willing disposition. As of October 2018, she is, in fact, one of her sire’s most accomplished offspring with 4 Sport Horse National Top Ten titles in hand and in dressage; 3 regional championships in Sport Horse Under Saddle and Dressage Training Level; 2 Pacific Slopes Championships in training level dressage, a reserve championship in sport horse under saddle, and 2 Pacific Slope Top 5’s in sport horse in hand; 8 Scottsdale top 5’s or better in sport horse in hand, sport horse under saddle, and training level dressage; 14 class A titles in various disciplines – 13 of them in performance/sport horse, and 1 top ten at National Breeder Finals; and 6 top 5’s or better in open dressage competition.

Her only foal to date, Madame Butterfly MRF by National Champion *El Nabila B, was Region 4 Top 3 ABS Yearling Filly and had earned 8 class A titles, including 5 blue ribbons before her export to Israel. 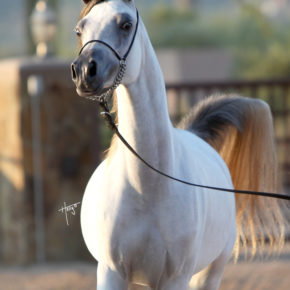 El Nabila B x Melaina A +