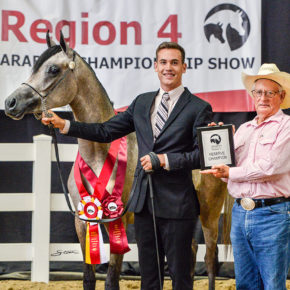 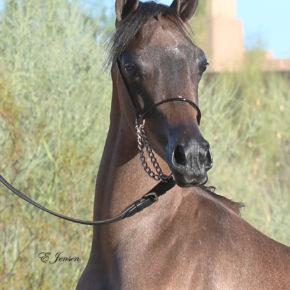 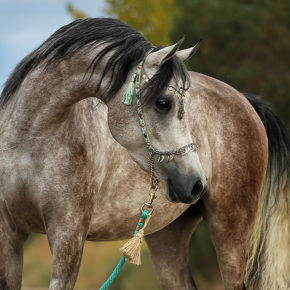 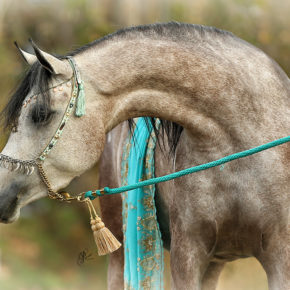 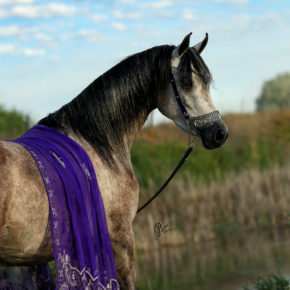 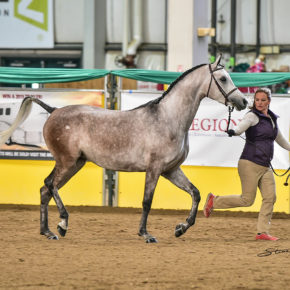 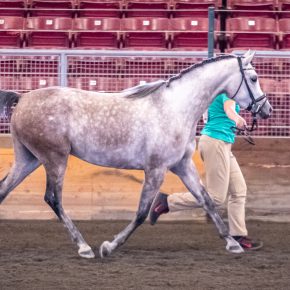 A 2015 grey mare, EVITA MRF, is the daughter of Arabian horse royalty.  Her sire, the grey U.S. and Brazilian National Champion Stallion, *El Nabila B, was sired by the European Champion, German National Champion, and World Champion Tersk-bred, 1995 Arabian of the Year, Kubinec (Balaton x Kosmetika by *Muscat), and he was out of the straight Egyptian mare, 218 Elf Layla Walayla B (Assad x 223 Ibn Galal 1-13 by Ibn Galal 1).   Kubinec’s sire, Balaton was also a national champion stallion as well as being hailed as “Arabian racehorse of the century” by Tersk Stud.  Breeders who have been around a few years will remember Kosmetika’s sire, the big red powerhouse, *Muscat (Salon x Malpia by Priboj) spearheading a Russian renaissance among Arabian horse breeders in the United States when he won U.S. National, Canadian National and Scottsdale Champion Stallion honors.  The Kubinec family was one of powerful, big-trotting, charismatic athletes.  It seems either sheer genius – or simple good horse sense – to have combined that family with the beauty and elegance of 218 Elf Layla Walayla’s straight Egyptian family to produce the correct, but elegant *El Nabila B.

EVITA MRF’s dam, the aptly named Empress of Marwan, herself a winning show horse and the product of a cross that has enjoyed extraordinary success in the Arabian horse show ring.  Empress of Marwan is by the legendary multi-World Champion Stallion and multi-World Champion sire, Marwan Al Shaqab (Gazal Al Shaqab x Little Liza Fame by Fame VF+), and she is out of another National Champion, FH Djamila (*Dakar El Jamaal x Nughayma by *Nugad), making her a 3/4 sister to World Champion Hariry Al Shaqab.

The lovely white FH Djamila was a multi-top national ten halter mare and a National Champion AAOTH before being exported to France.  Perhaps because of her long and successful show career, FH Djamila only produced four foals, including Empress of Marwan, before her export.   Though only two of her daughters have bred on to date,  those daughters, Empress of Marwan and  FH Jadore by Rodan LTD+//, are producing well.  FH Jadore produced the lovely, charismatic grey filly FH Jemina (by Eminence PS) who is already a regional and national winner.

Remarkably, EVITA MRF’s pedigree contains a considerable amount of Egyptian blood. Her sire is half Egyptian, perhaps a bit more if one considers the Balaton’s maternal grandsire was Aswan, and on her dam’s side, Gazal Al Shaqab is half Egyptian,  Ali Jamaal was half Egyptian, and *Nugad was by the beautiful half-Egyptian Aswan son, Kilimandscharo.    EVITA MRF was clearly designed to be what she is – a beautiful athlete destined to continue her legacy of beautiful, elegant athletes.